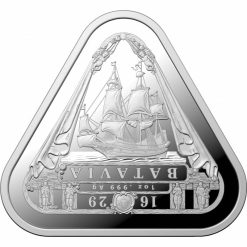 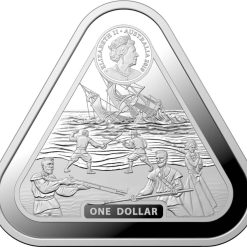 This Item Qualifies For Same Day Express Shipping!
Order Within The Next 9 hours 37 minutes

A brand new series from the Royal Australian Mint Australian Shipwrecks. For the first time in bullion, the series will feature coins that are triangular-shaped in size. The ill-fated Batavia, one of Australia’s oldest shipwrecks, is depicted on these magnificent gold and silver triangular investment coins as the first in the series of four. The design depicts the harrowing story of the Batavia’s wreck and the events that followed. These products are both a stunning investment and a commemoration of Australia’s maritime heritage.

The exquisite design of the reverse conveys two scenes to communicate the journey of the Batavia. With the image of the ship viewed upright, the Batavia is shown setting sail in its full glory. Flipping the coin to view the text of ‘1629’ and ‘Batavia’ upright depicts the ship in its final state capsized shortly after wrecking in 1629. The border encompassing the main design also incorporates unique design elements from the Batavia. The obverse design depicts the fighting between the survivors as a result of the mutiny and the Batavia before its ultimate demise.

In June 1629, the Dutch East India Company’s (VOC) vessel, Batavia, was sailing from the Netherlands to Batavia (Jakarta), when it struck a reef off the coast of Western Australia and was wrecked. Most survivors were able to swim to nearby Beacon Island, and the ship’s Commander Francisco Pelsaert took 47 crew and a longboat on a gruelling journey to Batavia to seek help.

Unknown to Pelseart, the Batavia had been threatened with a mutinous plot led by Undermerchant Jeronimus Cornelisz. Assuming leadership, Cornelisz and his supporters set about eliminating any opposition by murdering the survivors. A total of 125 men, women and children were killed. On Pelsaert’s return the mutineers were arrested: seven were hanged and two marooned on the mainland, making them Australia’s first recorded European settlers.

The wreck of the Batavia was discovered in 1963 and sections of its hull and other artefacts are on display at the Western Australian Maritime Museum. The Batavia, Australia’s second-oldest shipwreck, is an unparalleled tale of the darkest side of human nature.